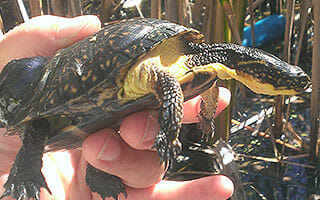 Since 2011, the Detroit Zoological Society staff has worked with the United States Fish and Wildlife Service, the Shiawassee National Wildlife Refuge (NWR), and students at University of Michigan Flint to help conserve Blanding’s turtles which are endangered and listed as a species of Special Concern by the Michigan Department of Natural Resources. At Shiawassee NWR, few young turtles were observed in the population, and it was realized that increasing numbers of raccoons were eating turtle eggs and young. DZS and its partners initiated a head-start program for young Blanding’s turtles. Eggs collected from nests at Shiawassee NWR are hatched at the Detroit Zoo, and young Blanding’s turtles are raised at the Zoo until they are old enough to be less susceptible to raccoon predation. More than 100 turtles have been released since 2012. UM Flint graduate students attach radio-tracking devices to the turtles to locate them and assess the success of the head-starting program. The DZS’s Center for Zoo and Aquarium Animal Welfare and Ethics is conducting a study on turtle personalities as an aspect of compassionate conservation. Compassionate conservation fully considers the needs of individual animals in conservation research and practice. This study considers how a turtle’s shyness or boldness, for example, may affect survival.

The Detroit Zoological Society (DZS) and the award-winning Holden Reptile Conservation Center (HRCC) are part of many SSP® programs. An SSP® is a program of the Association of Zoos & Aquariums which strives to manage and conserve ex situ (meaning “off-site”, or outside a species’ natural habitat) species populations in zoos and aquariums to ensure the sustainability of a healthy, genetically diverse, and demographically varied population. When suitable areas are available in situ (meaning “on-site”, or areas within the natural habitat of a species), individuals from SSP® programs can be released to the wild. The McCord’s box turtle is a critically endangered species from China. McCord’s box turtles have been hunted for meat, traditional medicine and a worldwide trade in turtles as pets. These factors, coupled with habitat loss due to the expansion of human populations, have pushed them to the brink of extinction. McCord’s box turtles are now rarely seen in Chinese markets, one way of monitoring populations, and this may mean the species is extinct in the wild. The DZS is the manager and studbook keeper for the McCord’s Box Turtle SSP® to help maintain an assurance population of these turtles in zoos. If protected areas in China can be identified in the future it is hoped that some McCord’s box turtles from the HRCC can someday be re-introduced to the wild. Siamese crocodiles formerly occurred over much of Southeast Asia. However, growing human populations have destroyed much of their habitat, and their current distribution is greatly fragmented. Siamese crocodiles are also threatened by over-hunting, and they are now the world’s second most endangered crocodile. As part of the Siamese Crocodile SSP®, 11 individuals hatched at the HRCC in 2015 are part of an ongoing reintroduction program to restore and bolster wild populations in protected areas of Southeast Asia. The Detroit Zoological Society provides financial support for biologists working with the Turtle Survival Alliance (TSA) to protect and study turtles and tortoises in India, Southeast Asia, Africa and South America. Turtle and tortoise populations in many countries are facing a crisis due to habitat destruction, trapping for the worldwide captive turtle trade and hunting for sale in Asian food markets, and it is estimated that as many as 10,000 turtles are disappearing from the wild each day. In Myanmar (Burma), for example, TSA confiscates and rehabilitates turtles and tortoises bound for Chinese markets. Then, TSA develops captive assurance populations and when populations are large enough they release individuals back to the wild. The TSA works to conserve a number of species that are also at the Holden Reptile Conservation Center such as Burmese star tortoises, Indian star tortoises, pancake tortoises, Egyptian tortoises and South African bowsprit tortoises.