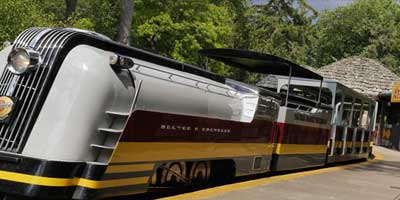 Back in action soon

Tickets are $3 per person for a one-way ride

The Tauber Family Railroad has been a perennial favorite at the Zoo, serving nearly half a million passengers each year since it was presented by The Detroit News in 1931. The miniature railroad consists of two complete trains of six coaches each and one standby. All three locomotives were donated by the Chrysler Corp. in the 1950s. In 1982-83, the locomotives were renovated and new coaches were fabricated through a fund-raising campaign by the Detroit Zoological Society and The Detroit News. The locomotives were refurbished again in 2008 with new coaches, rebuilt engines, gears, gauges, wheels and bodies. All aboard!

Board the Tauber Family Railroad at the Chrysler Main Station, located at the front of the Zoo near the admission booths, for a relaxing ride through the Zoo.

Board the Tauber Family Railroad at the Africa Station, located in the far northwest corner of the Zoo past the rhino habitat, for a relaxing ride to the front of the Zoo.