Since 2010, the Detroit Zoological Society has been involved in an assessment of amphibian populations in the Peruvian Amazon. The project includes field surveys to document species living in several sites along the Amazon and Napo rivers and testing for chytridiomycosis (chytrid Bd), an amphibian disease that is wiping out amphibian populations throughout South America and other parts of the world. People living in and around the study sites assist with conducting surveys so they can be a part of conserving their unique and fragile environmental heritage.

Education is also a critical component of this project. Local people around the study sites learn that amphibians are important components of the ecosystem by eating insects and serving as food for other animals and that they are important bio-indicators that reflect the health of the environment. Education about amphibians also dispels myths about amphibians, such as the myth that humans can contract diseases from toads. Changing erroneous and harmful attitudes about animals is a critical step in saving amphibians and other wildlife.

The Detroit Zoological Society (DZS) and the award winning National Amphibian Conservation Center (NACC) are part of many SSP® programs. An SSP® is a program of the Association of Zoos and Aquariums which strives to manage and conserve ex situ (meaning “off-site”, or outside a species’ natural habitat) species populations in zoos and aquariums to ensure the sustainability of a healthy, genetically diverse, and demographically varied population.  When suitable areas are available in situ (meaning “on-site”, or areas within the natural habitat of a species), individuals from SSP® programs can be released to the wild. As part of the Wyoming Toad SSP®, the DZS breeds critically endangered Wyoming toads at the NACC. Since 2001, the DZS has released more than 9,400 Wyoming toads into the wild as tadpoles, toadlets and adults. This population is maintained in special bio-secure off-exhibit rooms of the NACC. In fact, more than half of the NACC is off-exhibit with bio-secure or disease free areas for breeding. Closed circuit televisions at the NACC provide a glimpse into this work being done behind the scenes. The NACC staff also participates in yearly monitoring of the Wyoming toad population at release sites in Wyoming. 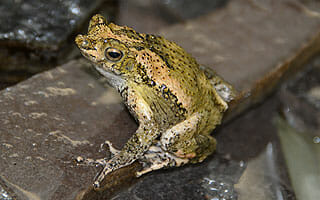 As part of the Puerto Rican Crested Toad SSP®, the DZS and the NACC breed critically endangered Puerto Rican crested toads.  Since 2008, nearly 84,000  tadpoles have been released into the wild. As part of the Dusky Gopher Frog SSP®, the DZS and the NACC maintain an “assurance population” of this critically endangered species. The captive population serves as insurance against extinction, and since 2018, 75 dusky gopher frogs from this assurance population were released to the wild. While at the Detroit Zoo, the dusky gopher frogs are maintained in special bio-secure behind-the-scenes rooms of the NACC. In fact, more than half of the NACC is behind-the-scenes with bio-secure or disease-free areas for breeding. As part of the Panamanian Golden Frog SSP®, the DZS and the NACC maintain an “assurance population” of this critically endangered species. The captive population serves as insurance against extinction until the species can be adequately protected in the wild and suitable locations are found for release. Since 2015, DZS staff from the NACC have made several trips to Panama to assist with setting up research and breeding centers to facilitate future reintroductions of Panamanian golden frogs. ASA is the world’s largest partnership for amphibian conservation. The Detroit Zoological Society provides financial support to ASA and is a Global Council member of the ASA. The ASA draws on cutting-edge research to protect amphibians and key habitats worldwide as well as educating and inspiring a global community to become a part of the amphibian conservation movement. Without immediate and coordinated action we stand to lose half of over 7,000 species of amphibians in our lifetimes. Since 2006, the Detroit Zoological Society has monitored mudpuppies in the Detroit River to track and better understand the population size and health of local mudpuppies. The aquatic salamanders are measured, weighed and implanted with computer chips for identification before being returned to the river. The Detroit River’s water chemistry is also tested and logged. The data gathered provide a valuable baseline for monitoring the health of the Detroit River ecosystem. Mudpuppies are important environmental watchdogs that visitors to the Detroit Zoo and the Belle Isle Nature Center can observe and learn about. Striped newts are native to the southeastern United States. They have undergone significant population declines from habitat loss, and since 2017, the Detroit Zoological Society has partnered with the Florida Wildlife Commission, Georgia Department of Natural Resources, the Coastal Plains Institute, and several AZA institutions to rear striped newts for release in protected areas. Staff at the National Amphibian Conservation Center have raised more than 75 newts at the Detroit Zoo, where they will live for several months before being returned to protected areas in Florida and Georgia. FrogWatch USA is a national citizen science program through the Association of Zoos and Aquariums (AZA) for monitoring local frog and toad populations. The Amphibian staff of the Detroit Zoological Society train citizen scientists to collect data about Michigan frogs and toads by identifying their calls. These data are then included in the national AZA database as well as the Michigan Department of Natural Resources herp atlas to help monitor the distribution and population trends for frogs and toads. If you are interested in contributing to frog and toad conservation from your backyard to across Michigan, join the local monitoring team. Training opportunities occur every February and March.

Learn More and Register for FrogWatch